Stonehenge is one of the wonders of the world. It’s a place of great mystery and power and every Winter Solstice for the last few years we have led a mixed band of cyclists on a pilgrimage through the night to experience sunrise there on the shortest day of the year.

Only on the equinoxes are you permitted inside the ancient stone circle, where England’s New Age Tribes (neo-druids, neo-pagans, Wiccans) lead the celebrations. The event attracts everyone and anyone from families, tourists, travelers, a few lycra clad cyclists as well as anyone else who fancies it.

The party got started at 01:00 with a large group of us meeting at the shop and heading out the city towards Southampton on the street lit and eerily quiet A27.

The group was made up of a brilliant mix of local riders and friends of the shop including members of the CTC, PNE, Sustrans, Southsea Fixed Gear, British Cycling and the Wednesday Night Pub Riders aka Audax Club Portsmouth, who were out in force and high spirits, possibly due to hip flasks replacing bidons for the festive period 😉

The temp was up 15 degrees from the weekend at a balmy 10 and the rain held off to start.

After picking up Steve on route we headed towards our first McDonald’s stop of the ride, don’t judge us it’s the only place open at 03:00 and the only place Terry can wangle himself a free coffee. Here we met up with the Southampton connection in the form of Josh, Anna and Ruth from Monty’s Bike Hub and Cycling UK. This was to be Anna’s longest ride to date, having only just decided to take part at the last moment it started to feel like more of an adventure. This feeling was only heightened as we left the street lights behind and headed off into the pitch black countryside.

Looking back at the group all you could see was lights and at a junction somewhere around deepest darkest Romsey Stephen from Bespoke Biking had join us following the hypnotic blicking of so many rear lights.

The rain had started as we left Southampton and never showed any sign of letting up.

We arrived in the cathedral city of Salisbury soaked and covered in mud just in time for McDonald’s number 2 to open and us to immediately ruin the place!

The route from Salisbury to Stonehenge is on the beautiful NCN45 and with not one mechanical between all of use we arrived in plenty of time.

Sunrise over the best-known prehistoric monument in Europe was typically cloudy and overcast, but as they say it’s the journey not the destination that’s important.

Happy New Year and thanks to everyone who attended and made the ride so memorable!!

You can check out the route we took by clicking here and join our Strava club to keep up to date on future rides here.

Special thanks to Jeff, Dan, Josh and Tony for the pics! 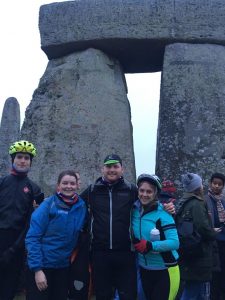 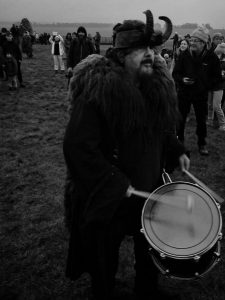 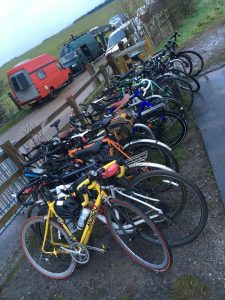